The Rocket League Championship Series (RLCS) is back and bigger than ever! With the largest RLCS prize pool ever of $6,000,000, more regions, and an updated format, the RLCS 2021-22 season is set to be the most exciting one yet.

Whether you made your way here after our RLCS announcement live stream or you're learning about the RLCS 2021-22 season for the first time, you're in the right place. Let's dive in and take a look at all of the big upgrades coming to the newest season of the RLCS!

For the RLCS 2021-22 season, the league is set to make the largest expansion in its history. We're excited to announce that the RLCS will be expanding to three new regions for the upcoming RLCS season. The new regions that will be joining the RLCS are:

This expansion opens RLCS competition to dozens of new countries across two continents (check out all the included countries in the Official Rules) and makes this season of the RLCS the most worldwide competition yet.

With this expansion, we also wanted to increase the uniformity of our leagues and competitions. We're excited to announce that every region playing in the RLCS 2021-22 season will now be playing the same format (more on format changes below). This will help make it extra clear to fans around the world who's performing at the top of their regions and how they compare to their international counterparts.

In addition to the expansion of the RLCS, we will also be officially supporting Sub-Saharan Africa with three Splits of Regional Events. While this region won't be a full participant in the RLCS this season, the two best-performing teams in Sub-Saharan African tournaments during the course of the RLCS 2021-22 season will have two guaranteed slots at the Rocket League World Championship Wildcard (more on that below).

We're excited to bring RLCS competition to more regions than ever this upcoming season and can't wait to see how they perform.

RLCS X was the biggest format change in RLCS history. The change from League Play to an open, circuit-based format was a huge leap for the esport. We didn't want to reinvent the wheel this season, but there were plenty of changes we felt needed to be made with the league's expansion. Let's start with the big headlines: 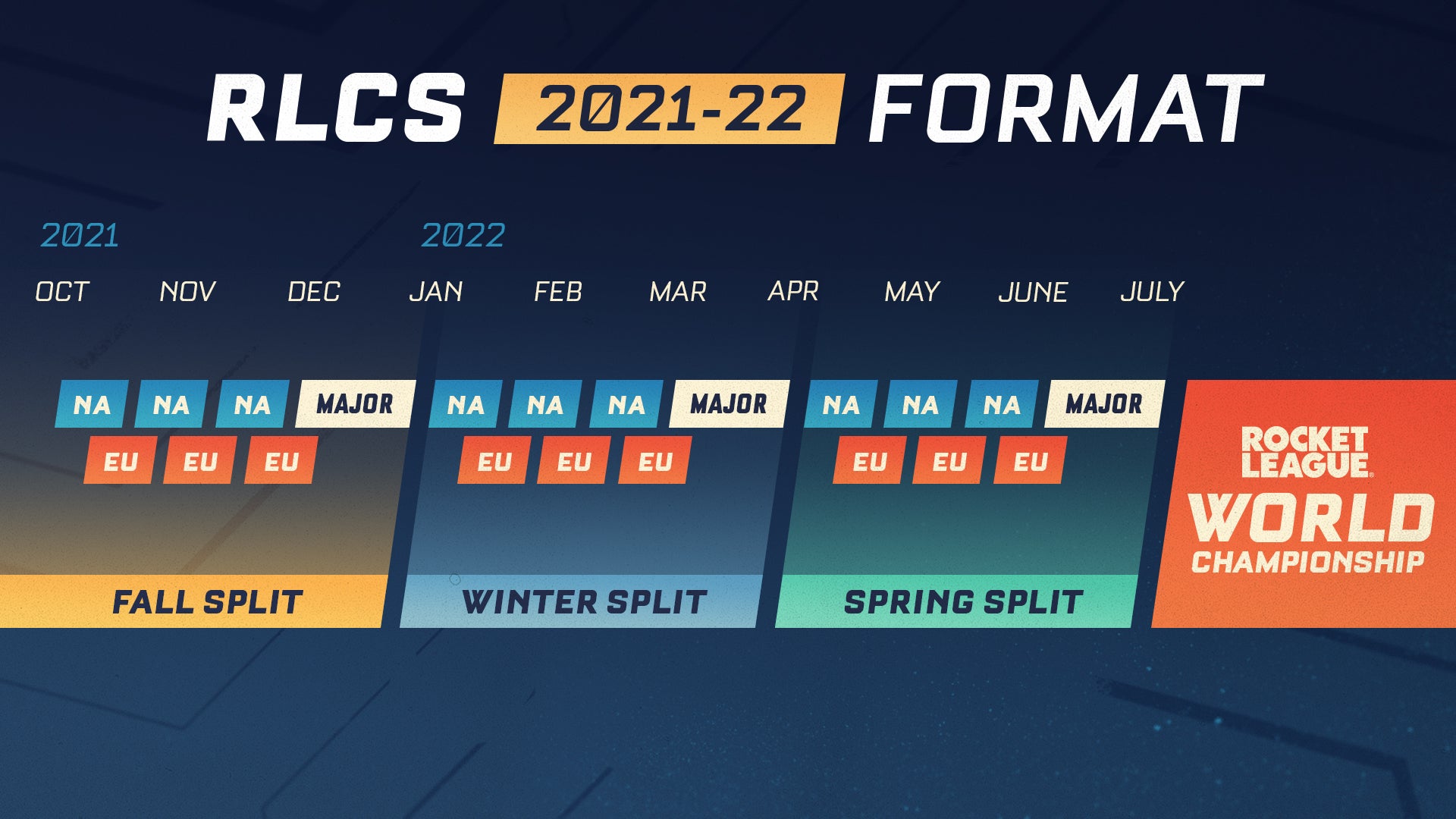 Below you will find the RLCS 2021-22 season schedule for all full RLCS regions. Please keep in mind that these dates are subject to change.

For Open Qualifier dates, head over to smash.gg!

Our intent is to bring LAN events back for the RLCS 2021-22 season, beginning with the Fall Major in Stockholm, Sweden as a players-only event. In light of the evolving situation regarding the COVID-19 pandemic, our goal is to execute each event with the safety of our players, talent, and staff as our top priority.

With that in mind, we also know it's been nearly two years since we last saw teams from around the globe face off in a LAN environment. The RLCS is a worldwide league and it requires LAN events for the format to function as intended. The initial return to LAN event (the Fall Major) will have no crowd and will have stringent health precautions in place for every player, talent, and staff member that is on site. We want to get fans back into arenas with their favorite players and we miss hearing the crowd go wild during clutch plays, but we won't be able to re-evaluate that option until 2022.

We're heading into the RLCS 2021-22 season with the full intention of having every Major and the Rocket League World Championship be LAN events, but we are also going to monitor the ongoing pandemic and make choices that are healthy for both the players and our league. We're looking forward to the best players from around the world finally meeting again at the Fall Major.

If you missed the RLCS 2021-22 season announcement stream be sure to check out the VOD on Twitch or YouTube which has extra information on upcoming changes to the Esports Shop, a new broadcast package, and the changes coming to the Rocket League Esports site next year.