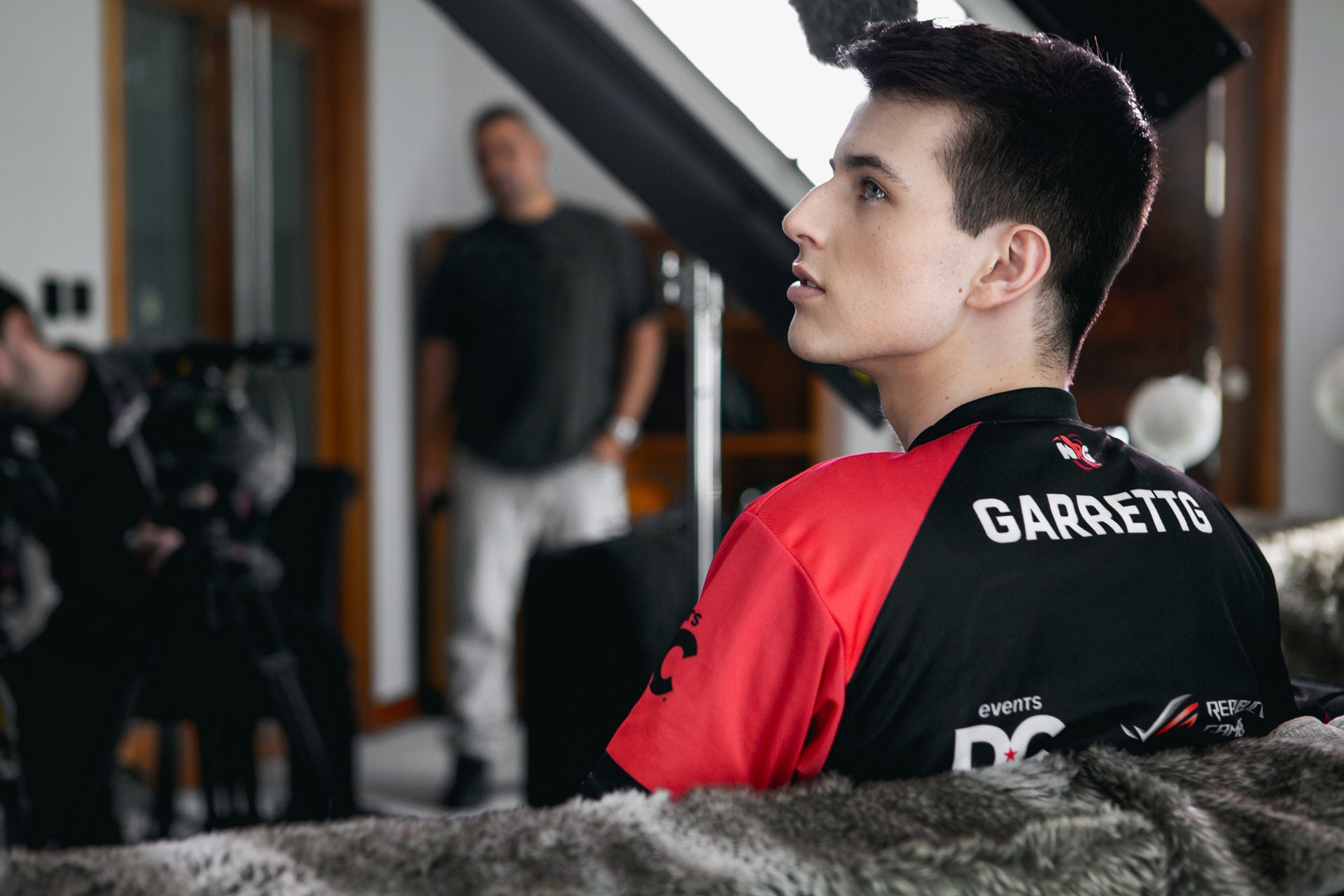 Now a household name in the Rocket League Esports scene, GarrettG (aka Garrett Gordon) quickly rose to popularity. He remains one of the most consistent, accomplished, and tenured veterans to have ever played the game. As one of only two players to qualify and compete at every single RLCS World Championship (his teammate Fireburner is the other), Garrett is no stranger to the limelight and playing at his highest level while surrounded by screaming fans.

The RLCS Season 5 World Championship in London was no exception, as Garrett led NRG to Game 7 in the Grand Final - which, as we all know by now, came down to a single deciding goal. NRG would lose that game, yes, but after coming off of a solid 3-1 victory over Flyquest in week 1, Garrett's team looks stronger than ever heading into Season 6 and its $1,000,000 prize pool. Following NRG's match last weekend, I had a chance to chat with Garrett about his time playing Rocket League and his expectations for the rest of the season.

Q: How was the off-season? What has the regiment been like preparing for this season of RLCS?

GarrettG: [The] off-season was pretty good. I didn’t really take a break from RL, but a break from scrims was nice. Practice leading up to this season has been pretty normal except for the fact that teams are scrimming a bit more now. It’s been around two hours of team scrims every day of the week and the rest of the day playing on our own.

Q: After your 3-1 victory over Flyquest, what kind of form are you guys in? Anything you are focused on improving as a team?

GarrettG: After the first week of RLCS, it’s pretty hard to see how we are playing. Even though this is my sixth season, there is something about the first week of online League Play that makes me a little nervous. I think we played well, but have some little things to improve on as a team. Rotating more cleanly is a big focus right now.

Q: How likely is it that NRG will go 7-0? Are you worried about G2/ Cloud9 or any other teams?

GarrettG: I personally don’t care much for the 7-0 “achievement...." All that matters to me is making Worlds. Once you are at LAN, your online record is completely irrelevant. Honestly, I am worried about every team in RLCS, I’ve always had the mindset I could lose to anyone at anytime. Cloud9 is looking scary, though.

Q: Who are the best players out there? Outside of or including yourself.

GarrettG: In my opinion, ViolentPanda is the best in the world. I can’t think of one instance where he has made a mistake against us. The hardcore fans know he is one of the best, but outside of that, he is extremely underrated for Dignitas’ wins.

Q: How is it having JSTN and Fireburner as teammates? How are comms during a match?

GarrettG: Me and Fire have been teammates for almost two years, I believe. I’m honestly extremely close to him and he’s the best teammate and friend I’ve ever had like that. Justin is the same way, we all get along extremely well and I’d say that helps a bunch in-game. Comms are pretty intense during our games; my callouts probably get a little annoying, because I talk so much, but I think it helps [haha]. We are extremely supportive of each other, even in losses, and are pretty open with changes we think need to be made.

Q: You’ve been competing for years now and are a true veteran of the RLCS. What has it been like competing and traveling, and now playing for a million-dollar prize pool?

GarrettG: Man, I can’t believe I started playing this game at 14 and I’m almost 18. This game has been a big portion of my life at this point, and I wouldn’t trade it for anything else. Everytime I go to LAN, I still can’t believe someone wants my signature because of how I play a video game. It’s been a pretty surreal experience. Even though I don’t really think of the money when I play, the one-million dollar prize pool is pretty awesome.

Q: What would it mean to you to make a run and win it all?

GarrettG: After season five I legitimately cried as soon as it was over. To be one goal away from my dream like that was heartbreaking. It just makes me want it more. I think about how that winning moment would be almost every single day.

Q: I’m sure many out there would appreciate some advice… Any tips for people looking to improve?

GarrettG: Honestly, every person is different. There’s no big secret to becoming a pro, you have to find your own way. The biggest piece of advice I do give is to just grind as much as possible, that’s what I did.

Q: Have any words for fans or shoutouts?

GarrettG: [I] Just want to say "thank you" to everyone who supports the scene. Without the fans there is nothing. I am extremely grateful for everything. <3

** Editor’s Note: Some edits were made for punctuation and readability**